Are You Taking Action To Protect Your Health Plan Against Extreme Drug Price Increases?

But are you aware that several other drug manufacturers are continually purchasing drugs and dramatically increasing their prices? And do you know that during the past 12 months the prices of almost 150 brand drugs increased by 100% or more?

Most important of all: Do you realize that as your Plan’s administrator, you can take steps to protect your Plan against some of these outrageous price increases? And if you do so, you will not only reduce your Plan’s costs, but also do your part to end manufacturers’ relentless greed?

Our firm’s experts regularly review for our National Prescription Coverage Coalition Members and for our other clients the increase in AWP of every brand drug on the market. Our goal is to provide critical information to our clients to ensure they can control their costs. Our simultaneous goal is to do what we can to transform the marketplace.

To help you accomplish these goals too, we are now providing you with our most recent AWP financial analysis.

If you right-click on this link, and then click on “open in new window,” you’ll see a spreadsheet showing: The name of every brand drug (column A); each drug’s manufacturer (column C); the Medi-Span AWP of each drug at the beginning of June 2015, December 2015 and June 2016 (columns F, E and D); and the 6 month and 12 month AWP increases of each drug (columns G and H). You’ll also note that our experts sorted all drugs by their annual percentage AWP increase, from the highest to the lowest increase. See column H.

Run your eyes down column C and you’ll see that several manufacturers’ names repeatedly appear (like Valeant, American Pharma, Spectrum and Mallinckrodt). You’ll also see the names of several of the world’s largest manufacturers (like Pfizer, Baxter and Glaxo).

Run your eyes down column H and you’ll see just how many drugs had staggering price increases during the past 12 months. Some of these drugs may be familiar, like the proton pump inhibitor Zegerid (691% increase) and the sleeping pill Restoril (50% increase). Others may be drugs whose names you do not recognize.

When you examine all the drugs that have far less-expensive substitutes, obvious questions should pop into your brain. For example –

Spend a few minutes examining our spreadsheet and you’ll likely conclude that it also makes no sense for your Plan to pay for numerous other drugs. For example –

Note that brand manufacturers almost never submit clinical evidence to the FDA that their brand drugs are more effective – or safer – than lower-cost alternatives.

Note, too, that many of the identified high-cost drugs have limited efficacy and/or significant safety risks:

For example, individuals using cold sore treatments – like Sitavig – can expect their cold sores to heal 12 to 24 hours sooner than if a placebo is used.(1) Given that fact, do you think it makes sense for your Plan to spend $500+ per prescription for Sitavig? 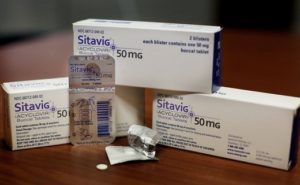 What about the wisdom of spending about $750 for a prescription of Restoril? Like many sleeping pills, common side effects of Restoril include somnolence, dizziness, headache, memory and learning impairment, coordination problems and longer reaction times.(2)

Also, Restoril was approved by the FDA for short term use, not continual use. If used longer than one to two weeks, users can develop “tolerance” for the drug causing it to lose its effectiveness.(3) Medical experts also state that the higher the dose and longer the drug is taken, the greater the risk of incurring withdrawal symptoms when people try to stop using it.(4) Medical experts have also long indicated that “[n]on-pharmacological treatments not only cause fewer side effects, but they can sustain long-term improvements more successfully than pharmacological treatments.”(5)

Given all the above facts, does it make sense for your Plan to continue to subsidize Restoril’s manufacturer, Mallinckrodt, when it raises Restoril’s AWP by 50%?

What You Can Do To Address Manufacturers’ Staggering Price Increases

If you’re tired of having your Plan’s assets plundered by manufacturers’ greed, you can do something about the problem.

In fact, right now, before you leave your desk, you can arrange to take advantage of our spreadsheet by doing the following:

Call up your IT specialist and tell him to search your claims data to determine the total users of – and your Plan’s total costs for – each of the drugs that we identified as having lower-cost substitutes. Then after you’ve reviewed the information he assembles, and understood the details, take any of the following actions in connection with each of the identified drugs:

Stop Coverage: If you have no – or very little – usage of certain drugs, you should stop covering those drugs as soon as you can, to prevent people from starting to use them.

If you already have considerable use of any drug, you can still stop covering the drug. But to minimize complaints, you’ll need to educate the drug’s users about why you’re ending coverage. More on that later.

Ask for Voluntary Action: If you don’t want to end coverage of certain drugs, you can try a different approach: Direct your PBM to write the users of each drug and ask them voluntarily to go to their doctors and request less-expensive substitutes. Simultaneously implement a new program – “Do Your Part – Use Drugs Wisely” – via every form of “messaging” feasible: Robo-calls, email communications, newsletters, website posts. Few Plans have tried this “voluntary” approach, but it may be just what is needed to generate a paradigm shift in the way our society thinks about drugs.

After all, decades ago, no one wore seat belts in cars, or helmets when biking, and everyone tossed their cigarette butts on sidewalks. But we’ve come a long way since then. Societally, we need to alter the way we think about and take drugs.

We need people to stop feeling entitled to – and to stop wanting access to – any and every drug, regardless of the drug’s efficacy, safety or cost. We need everyone to insist upon getting information about every drug they take – its efficacy, its safety, and yes, its cost.

Asking your plan beneficiaries to voluntarily forego high-cost drugs when lower-cost therapeutically identical or similar drugs are available is a perfect place for them to start doing their part to change the marketplace.

Tell your PBM to cap the amount you will pay for the specified brand drug at the amount of the lower-cost therapeutic substitute. Then tell your beneficiaries that if they want to continue to use the high-cost drug, they will have to pay the difference between that drug and the lower-cost generic (or OTC) substitute.

This will put the onus on your plan beneficiaries to decide if the higher-cost drugs are truly worthwhile.

Implement a Savings Program: If your PBM contract allows your Plan to customize your Step Therapy or Prior Authorization Programs, do so. Don’t assume that your PBM is paying attention and continually updating its “standard” Programs. It’s virtually certain that it’s not. So you must!

Assuming your PBM contract allows you to customize your Programs, tell your PBM that you want to do so, and solicit help from experts (like our firm) to develop the appropriate “tight” protocols for these Programs. Then require your plan beneficiaries to try one – or several – lower-cost alternatives before you provide access to the higher-cost drugs.

Note: If your PBM contract doesn’t allow you to customize your Programs, this is a sure sign that you should put in place a better contract as soon as you can terminate your contract.

Finally, when deciding which of the above solutions you want to implement, you can pursue different solutions for different drugs. But no matter which options you implement, make sure you do the following:

Also, point out that if all beneficiaries stop using outrageously priced drugs that have far lower-cost substitutes, the assets of the Health Plan and company will be conserved. And that will enable their Plan – and their company – to have money to use for other purposes, including higher wages and other benefits.

Additional Notes On Our Spreadsheet

There are a few additional matters you should note about the spreadsheet we’ve provided:

In the spreadsheet, we focused on drugs with AWP increases over 50%. Below that figure, we highlighted a smaller number of drugs that have readily available substitutes and are (i) drugs with very high costs; and/or (ii) very high usage; and/or (iii) drugs sold by two manufacturers that have repeatedly jacked up their prices by outrageous amounts: Valeant and Mallinckrodt.

As you’ll likely notice, our spreadsheet also identifies several drugs that aren’t even FDA approved. Even though your Plan may have instructed your PBM to only cover FDA-approved drugs, it’s reasonably likely that your PBM is allowing non-approved drugs to be dispensed and invoicing your Plan for those drugs.

You should end coverage for all these drugs too. And you should explain to your beneficiaries why you are doing so: They shouldn’t risk their health by using drugs that have never even been approved by the FDA.

Our experts regularly analyze AWP increases – and regularly provide information to our clients – to help them decrease and control their costs, as well as to do what we can to combat manufacturers’ widespread greed.

As a result, our clients have eliminated or decreased the use of many drugs that have had astronomic price increases, and they have thereby controlled their Plans’ costs.

Given that track record, we urge every Plan to engage in the same activities. And we end by asking all of you a simple question:

Is there any rational reason why you wouldn’t do so?

After all, if you stop paying for as many drugs as feasible that have enormous price increases, you’ll decrease your Plan’s costs, conserve your Plan’s assets, encourage wiser drug use by your Plan beneficiaries, and help improve our healthcare marketplace, which is in desperate need of transformation.

(2) See package label and multiple articles on the internet.