If those manufacturers’ words made you think the days of price gouging were over, think again.

Our firm just analyzed drug price increases by examining the Average Wholesale Prices – a/k/a AWPs – of thousands of drugs over time.(1) We determined how much AWPs increased (i) for the twelve month period from the beginning to the end of 2017, and (ii) for the 14 month period from the beginning of 2017 to the beginning of March 2018.(2)  Then we “sorted” drugs from those with the largest AWP increases to those with the smallest, eliminating all powders and repacks as well as all drugs with increases of 5% or less. Our two Analyses can be found here and here.

What do our two Analyses show? Drugs’ AWPs continue to increase at shocking rates. In fact, during the most recent 14 months:

In our firm’s view, every Plan – including yours – should consider blocking coverage of drugs with excessive AWP increases, wherever feasible, for at least two reasons. First, you’ll better control your Plans’ costs. Second, manufacturers’ price gouging will end only when the marketplace responds to their price gouging.

Analyzing the “worst offenders” with AWP increases of 100% or more: Most of these drugs are not costing Plans much money. But Plans can – and should – still block the vast majority of these drugs given lower-cost alternatives, as reflected by all drugs marked in red below. Note that drugs identified as “MAC’d Drug” are generics for which a different analysis is necessary (3): 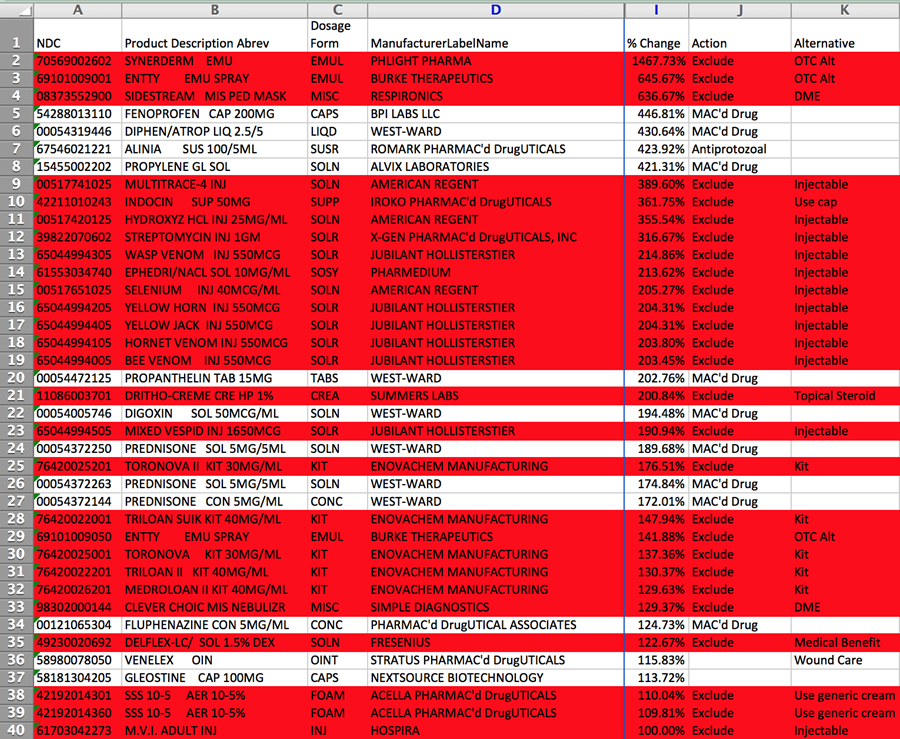 Accordingly, if your Plan wants to control its costs – and take a stand against manufacturers’ price gouging – we urge your Plan to review our Analyses and consider blocking more drugs. If you need help figuring out which ones you can block while still providing strong coverage, contact our firm. We’ll help you (i) understand the replacements that are available for many drugs with large AWP increases; (ii) calculate the disruption that will occur for each drug that might be blocked; (iii) calculate the savings you’ll achieve for each such drug; and (iv) help you create a messaging program that will assist your Plan beneficiaries in understanding the importance of blocking certain drugs.

Price increases of 50% or 100% or 1000% grab newspaper headlines. But every Plan should realize that smaller price increases on very high-cost drugs can have an even greater impact on Plan costs.

To understand the problem, let’s look at the therapeutic category of  immunosuppressant drugs that treat rheumatoid arthritis, Crohn’s and other immunological disorders. These drugs are almost always among Plans’ “Top Twenty Most Expensive Drugs.”

Since many of these drugs cost $5,000+ per 30 day treatment, your Plan’s aggregate costs will increase far more from the 8% to 18%+ AWP increases of these high-cost drugs than your Plan will suffer from 500% or even 5000% increases on low-cost drugs.

Other high-cost drugs that are probably also among the most costly drugs your Plan is covering pose the same danger to your Plan given their recent AWP increases. We list a few examples below:

In short, when manufacturers increase their prices for high-cost drugs by single digits each year, meaning by as much as 18%+ across two years, the impact on Plans’ total costs is staggering.

Note that PBMs claim that the “Rebates” they are collecting are controlling Plans’ costs. But PBMs refuse to disclose the “Rebates” they pass though on a drug-by-drug basis. Therefore, your Plan – and others – can’t determine whether, or to what extent, any PBM’s increased Rebates will counter the increased AWPs of numerous high cost drugs.

That’s why it’s critically important for every Plan to insist in their PBM contracts that PBMs provide drug-by-drug Rebate information. That’s also why our firm has made certain that our Coalition Members have such access, and we insist that all our clients obtain such access when we conduct PBM RFPs. We discuss the problem with PBMs’ rebate disclosure – or to be more precise, lack thereof – in greater depth at the end of this missive.

Price Increases For Brand Drugs That Have Lost Patent Protection

Although it’s hard to believe, in the year or two before brand drugs lose patent protection – and for many years thereafter – brand drug manufacturers often increase the brand drugs’ prices by large amounts.

You can observe this phenomenon by examining several drugs that have lost their patent protection during the past decade. Even though all such drugs are competing against numerous chemically-identical generic drugs with far lower prices, brand drug manufacturers continue to increase the drugs’ prices: 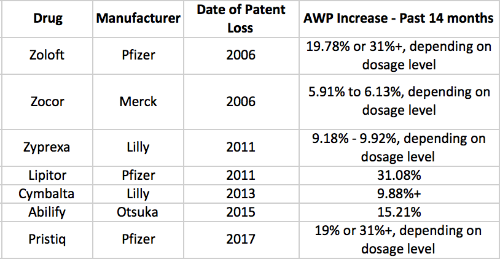 Most of your Plan Beneficiaries have probably stopped using brand drugs that lost their patent protection five or more years ago. But you should block coverage for all such drugs to make sure no Plan Beneficiary continues to use them.

More important, doctors continue to prescribe – and many individuals continue to take – drugs like Abilify and Pristiq that lost their patent protection in the past few years. If your Plan hasn’t blocked coverage of all such drugs – or at least implemented a Mandatory Generic Program (requiring beneficiaries to pay the difference between the relevant brand and generic drugs) – it should. That’s especially true, given manufacturers’ continued price increases. After all, why should your Plan tolerate ever-increasing prices for Brand Drugs, when chemically identical, lower-cost generics are available?

Our consulting firm and Coalition experts track the loss of patent protection for all ongoing clients, and alert them when existing brand drugs lose their patent protection and lower-cost generics become available. We’re currently doing so for Viagra, which lost its patent protection a few months ago, and Cialis and Forteo which soon will do so, especially given these drugs’ large AWP increases during the past 14 months:

Manufacturers Are Even Increasing Opioid Prices

Our Analysis shows that the AWPs of most opioid products also increased dramatically during the past 14 months, despite mounting deaths from opioid addiction:

Opioid manufacturers may think it’s acceptable to increase their profits on opioids notwithstanding our country’s struggle to reduce opioid addiction and deaths. What’s your view?

Isn’t it time for every Plan – and the federal government and all state and local governments – to end opioid profiteering?

Shouldn’t every Plan also insist on understanding the contents of PBMs’ secret agreements with opioid manufacturers? Don’t you want to know whether your PBM is collecting “inflation protection rebates” based on opioid manufacturers’ increased prices, or other fees related to opioids that your PBM isn’t even passing through to your Plan?

We’ve previously urged every Plan to consider filing an accounting procedure to learn about its PBM’s secret deals. Manufacturers’ increased prices for opioids present another reason for doing so.

To evaluate the conduct of each of these manufacturers, we “sorted” the data in our Analysis by manufacturer to determine every manufacturer’s AWP increases for the 14 months immediately before March 2018. Our Analysis is here.

Review our Analysis and ask yourself this question: Did the five manufacturers live up to the letter and the spirit of their single digit price pledges?

We know our answer: It’s a resounding “no”.

We provide a short list below of several such drugs, identifying their 14 month AWP increases:

There are many others that you should consider blocking as well. If you contact our firm, we’ll help you identify all such drugs, discuss the replacement alternatives, understand how much disruption will result from blocking each drug, and calculate your Plan’s savings.

PBMs claim they counter manufacturers’ ever-increasing prices by demanding that manufacturers pay more in “Rebates”. But almost no PBM is willing to disclose drug-by-drug Rebate information. Therefore, Plans can’t compare the increased amount that PBMs are passing through in Rebates on any specific drug to the manufacturer’s increased price on that drug.

Making matters worse, most PBMs extract not only “Rebates” from manufacturers, but other payments that PBMs label with other names (such as Health Management Fees, Data Sales Fees, Prompt Payment Discounts, etc.) Virtually all PBMs retain  these “other payments” and don’t pass them through to Plans. To the extent such payments are based on a percentage of the total dollar value of the drugs dispensed, the more manufacturers increase their drug prices, the more profits PBMs make.

The largest PBMs – Express Scripts, Caremark and Optum – which provide coverage to approximately 80% of the entire market – could operate differently. After all, PBMs don’t have to enter into secret deals with manufacturers. Nor do PBMs need to collect Rebates that incentivize manufacturers to increase their prices. PBMs also don’t have to secretly arrange to receive and retain “other payments” from manufacturers.

Instead, PBMs could renounce their secret deals and create a marketplace where price competition would drive down the prices of most drugs. All PBMs would need to do is require every manufacturer to submit its actual price for each of its drugs electronically, at a specified time (say 9 a.m.), on a specified “Bid Day”. Then PBMs could lock each manufacturer into its stated prices for a specified period (say 6 months), and disclose all such prices by therapeutic category to all doctors and consumers, enabling them to compare prices and then prescribe and take the lowest-cost drugs.

For those who want to end ever-increasing drug prices, we urge you to raise your voices and tell your congressional representatives to implement Bid Days for federal drug programs, including Medicare, Medicaid and the government’s drug coverage program for federal employees. Large states could also change the marketplace by implementing Bid Days.

As for the private marketplace, we’ve previously described in an Op-Ed published by STAT how Amazon could transform the marketplace. If Amazon doesn’t take the steps to implement Bid Days, another large entity like Walmart, Kaiser Permanente or even the Health Transformation Alliance may do so instead.

In the meantime, your Plan should do all it can to reduce and control its costs, by tracking AWP price increases and eliminating coverage for unnecessary drugs that manufacturers are gouging your Plan for covering.

(1) Even though drug manufacturers typically decide their drugs’ WACs (Wholesale Acquisition Costs), while national reporting services like First DataBank and Medi-Span decide drugs’ AWPs (Average Wholesale Prices), we analyzed AWPs – rather than WACs – for two reasons: First, almost all PBM-Plan contracts contain pricing terms and guarantees based on AWPs, not WACs. Second, AWPs are almost always directly related to WACs. Since September 2009, a drug’s AWP is typically 1.2 x its WAC.

(2) Our date range was slightly before December 31, 2016, and slightly after February 28, 2018 to capture changes immediately before and after those dates.

(3) For Generic Drugs, AWPs are of far less relevance, since PBMs create their own Maximum Allowable Costs (MACs) for each drug, and change their MACs whenever the PBMs want, to whatever amounts the PBMs want. And PBMs typically invoice for Generics based on the lowest of (i) MAC, (ii) U&C, and the (iii) AWP discounted price, meaning many Generics are not invoiced based on AWP.

(4) A few immunosuppressants had smaller AWP increases during the 14 month period, including the following: