The Report should also cause every Plan to stop providing coverage for these 3 drugs and to stop relying on its PBM’s “standard” Formulary.

Read on, and we’ll explain why.

Three Drugs That Plans Should Definitely Not Cover

Horizon’s Vimovo and Duexis can best be described as “combo convenience drugs”.

The theory behind each drug is that it’s convenient for users to combine the products, because Aleve and Advil and Motrin sometimes cause stomach irritation, and Nexium and Pepcid can reduce stomach acid to prevent that result.

Unfortunately, Horizon’s pricing for each of these drugs is outrageous. For a 30 day prescription, Vimovo typically costs approximately $2,200 and Duexis about $1,500. [1]

The usefulness of Horizon’s Pennsaid is similarly questionable, and its pricing similarly outrageous. Pennsaid is a topical treatment that individuals can rub into their knees to reduce pain from arthritis. But its efficacy is limited, and it costs approximately $1,500 for a 30 day prescription.

Tellingly, the per pill AWP of Vimovo and Duexis – and per milliliter AWP of Pennsaid – has also relentlessly increased during the past 5 years, as reflected in the Chart below. Note, too, how Horizon drastically increased Vimovo’s and Pennsaid’s prices after acquiring each of these drugs.

So Why Are PBMs Covering These Drugs?

The answer of course is simple: Money.

Horizon’s Quarterly Report openly acknowledges that Horizon offered increased “rebates” to PBMs to ensure PBMs would include the drugs on their “standard” Formularies in 2017.

Four observations about Horizon’s blunt statement should be noted:

First, the increased “rebates” that Horizon is paying to PBMs almost certainly include increased “other monies” that PBMs retain for themselves. Don’t forget – as we’ve previously explained, as long as PBMs label the monies that Horizon pays to the PBMs with a label other than “rebates”, PBMs can get rich making their secret “deals” with Horizon (and with other manufacturers as well, since PBMs pursue the same tactics with other manufacturers too).

Second, as we’ve also previously described, the additional “rebates” that PBMs collect for these drugs enable PBMs to offer higher “rebates” to existing clients and new potential clients, duping both into thinking that the PBMs are reducing client costs (which the PBMs are obviously not doing). Unfortunately, almost all PBMs are currently retaining their existing clients – and winning new clients – based on PBMs’ promises of far higher rebates, which often are obtained by covering drugs like Vimovo, Duexis and Pennsaid that increase clients costs, rather than decreasing them.

Third, Horizon openly stated in its First Quarter Report that its “strategy” is to pay PBMs increased monies to gain Formulary access, and had Horizon and PBMs not entered into these contracts, “long term, [Horizon] would be in a negative position.”[3] Translation? PBMs’ secret “deals” with Horizon enabled it to generate profits from these outrageously priced drugs, and had PBMs refused to enter into their secret “deals” with Horizon, PBMs could have dramatically impacted Horizon’s financial situation (and perhaps forced Horizon to lower its prices to obtain sales).

Fourth, according to Horizon, PBMs also provided “input” to Horizon about its likely increased profits. As Horizon stated: When Horizon “established financial guidance for full year 2017, [Horizon] made estimates of the adoption rates and mix [of different types of PBM clients]. This took into account input from the PBMs.”[4]

Buried in Horizon’s Presentation to investors was the following revealing slide: 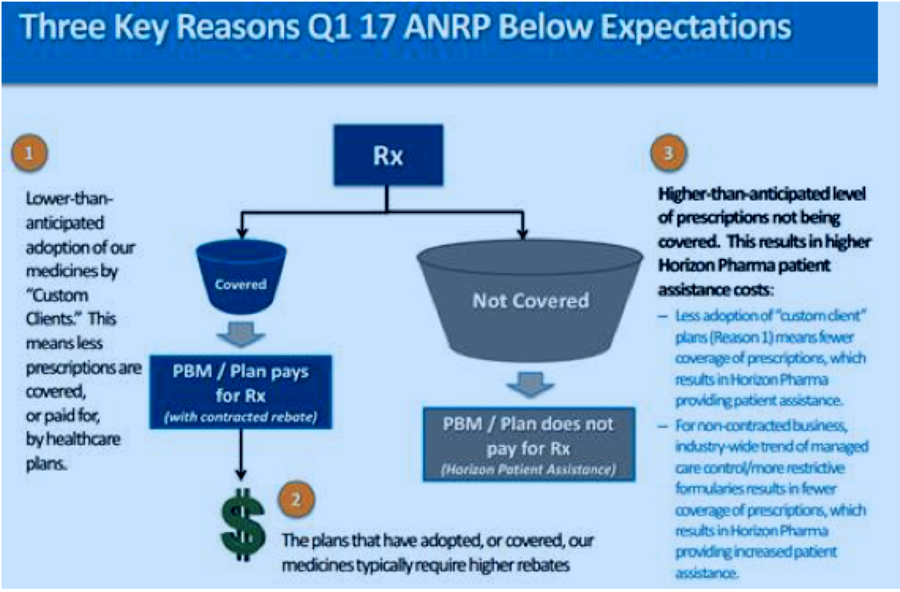 According to Horizon, it realized lower “average net realized prices” (ANRPs) for the 3 drugs for the following reasons:

* The above resulted in more beneficiaries of customized Plans taking advantage of Horizon’s “free” drugs dispensed through Horizon’s patient assistance programs. Again – Lucky for Plans that use customized Formularies!

The question is: What happened to your Plan’s total costs for these 3 drugs during this period?

So What Should Your Plan Do?

Short term: If your Plan is still covering these 3 drugs, you should stop covering all 3 immediately.

None of these drugs is necessary. All are ridiculously priced. And given Horizon’s past practices – and its poor First Quarter 2017 performance – Horizon may increase the prices of all 3 drugs yet again in the near future. Moreover, manufacturers that inflate their prices for unnecessary drugs – and relentlessly raise their prices – should feel the sting of lost business.

Note, too, there are about two dozen other drugs that you should also stop covering immediately. We’ve previously described likely targets, but each Plan should undertake its own “high-to-low cost analysis” of its own claims data to determine which drugs it should exclude. We routinely conduct such analyses for a few thousand dollars. Depending on their size, our clients typically save hundreds of thousands of dollars – or millions – from what they learn. Therefore, there’s no excuse for not conducting such an analysis.

When you stop covering these 3 drugs (and any others you might no longer cover), we warn you “Beware!” Based on our firm’s review of hundreds of PBM-client contracts, your PBM contract undoubtedly allows your PBM to decrease its “rebate” payments as much as your PBM wants. And when it does, your PBM may reduce your total rebates by more than the “rebates” it was actually passing through to your Plan for the drugs you are no longer covering. That’s especially true, because your PBM may lose the “extra revenues” it was earning from its secret “deals” (through monies that your PBM retained because it labeled the monies something other than “rebates”).

What can you do to prevent your PBM from unfairly decreasing your rebates? Even if your PBM contract does not provide you with the right to obtain information about drug-by-drug rebates, you should insist that your PBM disclose how much in rebates your PBM was collecting and passing through to your Plan for these 3 drugs. After all, on what equitable basis could your PBM be allowed to reduce your rebates inequitably, and keep you from knowing it is doing so? Under the law, there’s a concept of an “accounting”. Get an “accounting” from your PBM!

Longer term: As soon as you are able to do so, you should terminate your existing contract and obtain a new contract with a PBM that allows you to:

* Make sure you have personnel (either an in-house or outside expert) to provide regular monitoring of drug price changes, new-to-market drugs and other marketplace changes to ensure you control your costs on an ongoing basis

Finally, your next PBM contract should also require your PBM to provide detailed evidence of any rebate reduction it attempts to impose, should it claim such a reduction is required. And no rebate reduction should be allowed, unless the PBM provides the requisite evidence.

The contracts that our consulting firm puts in place through PBM RFPs for our clients contain all the above-described terms, as does our contract for the National Prescription Coverage Coalition.

To review other Rx Drug Alerts, go to the Menu Bar and click on Rx Alerts.

[1] Plans’ costs for these drugs will vary, depending on several variables, including the terms of their PBM contract and which pharmacies their beneficiaries most use. The approximate costs that we state are based on a review of extensive claims data, and a calculation based on 2 pills per day, which is how these drugs are almost always prescribed and dispensed.